Long exposure photography allows you to get some special effects to your everyday photo shoots. It basically involves setting your camera to a manual mode and slowing down the shutter speed.

Long exposure photography can be accomplished both day or night but you will need some basic equipment – above and beyond adjusting your camera settings. The preceding 3 shots, in the film strip, were obviously taken at night. The subjects were moving objects and there was significant light available. Equipment required includes:

If you are taking long exposure shots, during the day, a neutral density (ND) lens filter is suggested if you really want to slow down the exposure. I use a 10 stop ND filter. The following carousel of day shots were taken with low ISO (say 100 or less), an exposure of 25 to 30 seconds and aperture of F20 to F22. 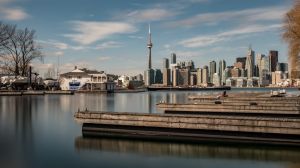 Keep in mind, you will require the necessary equipment as in the tripod and remote shutter release (to avoid camera shake). If your lens has a VR setting (vibration reduction), you want to turn that off as you will get a better image. VR is typically used when you are not shooting with a tripod and may have negative effects when using a tripod.

Another camera setting you can adjust, is the camera’s White Balance. Some of the settings I use include Cloudy, Fluorescent and adjusting Kelvin. You can test some White Balance settings until you get the desired effect.

Daytime long exposure shots can be taken without a tripod as well. This shot was exposed at 1/15/second, ISO 200, F25 with a 105mm lens. Make sure you hold the camera steady and have your VR setting on.